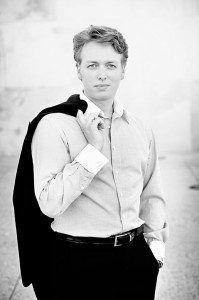 Cameron Becker, a native of Leawood, Kansas is quickly making his way to the top of the international performing arts scene with a wide ranging repertoire and already 700 performances throughout Europe. The critics are in agreement calling him, “Exremely musical…a high, powerful, yet agile voice performing consistently at the highest level” as Walter von der Vogelweide (Tannhäuser), “the secret star of the evening…confident top…refreshingly agile…terrific and ideally cast,” as Pedrillo in Die Entführung aus dem Serail, “Brilliant…a true Wagnerian Lied…most beautifully interpreted,” for Steuermann in Der fliegende Holländer, “Becker’s voice shone bright and clear…exemplary betrayal and authoritative articulation,” as Kudrjas in Katya Kabanova, and “Cameron Becker deserves the greatest compliment…captivatingly empathetic…smooth and elastic voice…a true sound experience…perfect interpretation,” as Tony in West Side Story.

The 2020/2021 season was a hard blow for many artists. The shutdowns from the pandemic led to cancellations of both a debut as Nemorino (L’elisir d’amore) at Teatro Petruzzelli and a debut at the Zürich Opera House as Fatty/Willy (Rise and Fall of the City of Mahagonny). He was fortunate to still realize a production of Falstaff at Teatro Petruzzelli as Fenton and his debut at the St. Gallen Festival as Gringoire in Franz Schmidt’s Notre Dame.

Mr. Becker entered his fifth year and final year as an ensemble member at the Baden State Theater in Karlsruhe for the 2019/2020 season. After successful portrayals in previous years, he reprised both Tamino (Die Zauberflöte) and Max (Der Freischütz). December marked a role debut as Don Ottavio (Don Giovanni) and in March he gave a liederabend and masterclass at Coastal Caroline University just before the shutdown.

The 2018/2019 season marked an important debut for the young tenor as Max in Der Freischütz in Karlsruhe along with reprisals of Tamino (Die Zauberflöte), Siegfried (Die lustigen Nibelungen), Schulmeister (Das schlaue Füchslein), and Freddy (My Fair Lady). He debuted Beethoven’s 9th Symphony with the Orchestra Verdi in Milan and Lucerne along with the RTV Slovenia Symphony Orchestra in Pordenone, Italy.

During the 2017/2018 season, Mr. Becker sang the title role in La clemenza di Tito, along with Tamino (Die Zauberflöte), Froh (Rheingold), and Siegfried (Die lustigen Nibelungen). His third Italian house debut was celebrated with a successful Steuermann in Teatro Petruzzelli’s Der fliegende Holländer under the baton of Giampaolo Bisanti.

The 2016/2017 season was a breakout season for the tenor with successful debuts at Teatro La Fenice in Venice where he sang the role of Walther von der Vogelweide in Richard Wagner’s Tannhäuser, followed by a house debut at the Teatro Regio in Torino. He revised his highly praised portrayal of Aljeja, “Excellent role interpretation…young, bright, and extremely appealing…a singer I’d like to hear again” in the Calixto Bieito production of From the House of the Dead at the International Janacek Festival in Brno with the Nuremberg State Theater.

Mr. Becker graduated with honors from both the Mozarteum University in Salzburg, Austria and Arizona State University.